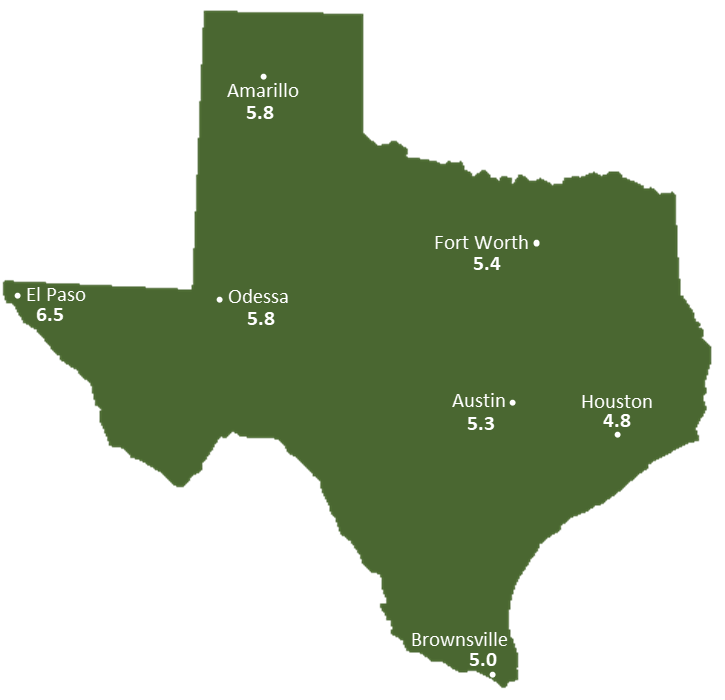 Texas, is not the lone state to take advantage of its high average peak sun hours with solar power. Texas is even bigger and better and using renewable energy sources for electricity than many states in the country, even as an oil state. A true energy powerhouse in solar, wind and fossil fuels.

With an above average amount of peak sun hours throughout the state, Texas with its huge variety in geography and population has done a pretty good job at taking advantage of solar power but there is a lot of room to grow.

El Paso, to the western side of the state, has the highest average of peak sun hours and solar insolation. But the rest of the state is still prime for a huge boom in installed solar power capacity.

Learn All About Small Wind Generators/Turbines

Due to high Texas electricity rates, there is an increased installation of small wind generators. They are recommended to use in places where the speed of wind is 4.4-meter per second. These small wind turbines will help you not only save in avoiding the high cost of electrical energy but are also  important for environmental conservation.

Basically, the small wind turbine is an electricity generating machine that works by utilizing wind energy. Due to the spinning of a wind turbine, the shaft starts its rotation and spins a generator. As a result, the wind energy is converted into the electric energy.

The small wind turbines are mostly used for commercial purposes, but now people have started to use it for residential purposes due to the high rates of electricity from the electric companies where most of the electricity is produced through the use of fossil fuels. The ‘urban wind’ technology is the wind energy generation technology that is specially made to work in the urban environments.

The blades of HAWTs are very much similar to a propeller, and us a rotating shaft mounted at the top of a tower, these wind turbines work for harvesting wind energy and convert it into electrical energy. The VAWTs are made in which the rotor shaft is in the vertical direction, but have the similar goal to harvest wind energy for electricity generation.

A pole or a tower is considered the best place to mount the small wind turbines. Wind speed often increases with the increase in elevation, therefore, mounting of wind turbines on tall poles and towers help in better wind energy conversion.

Other than the poles and towers, the small wind turbines are sometimes mounted on buildings, hills, and trees. But they are not recommended by experts because at such places the turbulence in the air is very high that will reduce the ability of small wind turbine to harvest wind energy according to its potential.

This is just very basic knowledge about the small wind turbines that one can use and perhaps purchase.

Using averages from a fixed solar panel, there are 4.92 hours of peak sun light across the state of Texas. This number would vary if you were using a 1-Axis or 2-Axis tilt panel.

Taking the average daily sun light hours works well for looking at long term calculations in your area. On a daily basis this number will fluctuate due to several outside variables. For example, on a cloudy day in the winter this number would be low, but on a sunny day in the summer this number could be much higher. Looking at an average will help you calculate and plan for the output and best hours of solar insolation you can expect from your solar panels in Texas throughout the year.

More Information for Cities in Texas

See all cities in Texas