The Problem of Intermittent Energy with Renewable Energy Sources 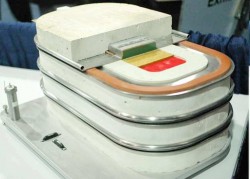 Electrical energy supply and demand should be in constant balance.  And since energy demand consistently changes, for example during the changing of seasons or the time of day, the energy supply needs to shift levels to remain in harmony with demand.  When supply and demand fall out of sync, extra costs accrue, energy is wasted, and the every day luxuries of life are threatened.

Energy supply systems that use a renewable energy source — wind, solar, hydro — are always at odds with nature.  If the wind is not blowing strong enough, if it is cloudy or nighttime, or if a drought is inflicted upon a once rainy region, then the wind turbines, solar energy systems, and hydro turbine generators of these areas will probably not be able to provide ample electrical supply.

An intermittent energy source is an energy source that is unable to produce a constant supply of energy due to uncontrollable outside forces.  Unfortunately, humans have little control over the wind speed, sunlight supply, or the natural water cycle of the Earth.  So, renewable energy systems must usually be backed up by an electric grid that is supplied by coal or nuclear power plants.  But, coal and nuclear power plants produce energy at nearly constant rates, which makes them slow to change to the constant shifts in energy demand created by the intermittency of nearby renewable energy sources.  This causes problems to the balancing of supply and demand.

The problem though, is not that nearby homes of an established region will immediately go without power, because power grid systems have very complex electrical supply networks that allow electricity to be aggregately sent to specific areas of a grid from many sources.  The problem is that it is difficult to integrate the elastic electrical supply of renewable energy systems into the rest of the power grid — which runs a more slowly changing and consistent supply — without wasting money or energy.

How a Liquid Metal Battery can Solve the Intermittency Problem

A group of MIT students, researchers, and professors, have developed and are attempting to commercialize what is called a Liquid Metal Battery.  The goal of the battery is to create a sort of “middle ground” of energy consumption and energy storage that can link renewable energy systems as a more constant flow of electrical supply to the regular power grid.

The battery, in order to remain cost-sensitive, is made up of earth-abundant elements.  MIT professor and the founder and chief scientist of LMBC Donald Sadoway explained, “If you want to make a valuable product dirt-cheap, then you need to make it out of dirt.” 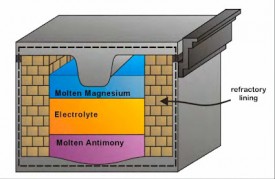 The battery is made up of three layers: the top layer is magnesium(Mg) a light liquid metal, the middle layer is molten salt(Na), and the bottom layer is antimony(Sb) a dense liquid metal.  To produce current, magnesium loses two electrons to become magnesium ion(Mg2+), which then migrates across the electrolyte, accepts two electrons from the antimony, and then mixes with it to form an alloy. The battery is then placed in between a renewable energy source and the power grid, and acts as a storage unit for the electricity created from renewable energy.

The liquid metal battery works well in theory, but still needs a lot of research and development before it can become readily commercialized and affordable.  The battery is a huge step towards facing the problems of intermittency with renewable energy systems.  A commercialized liquid metal battery would make it much easier to integrate renewable energy systems into the ever-changing supply and demand of the normal power grid.